Transcranial magnetic stimulation (TMS) is a widely used non-invasive method for the investigation and modulation of human brain functions. However, the activity of individual neurons evoked by TMS has remained largely inaccessible due to the large TMS-induced electromagnetic fields.

In collaboration with our cooperation partners, we have developed a general method that provides direct electrophysiological in vivo access to TMS-evoked neuronal activity 0.8-1 ms after the TMS onset. This time-window was previously not visible due to the superposition by the magnetic fields.

In order to gain a deeper understanding of the physiological processes in humans, we translate the stimulation protocols used in humans to rodents. For single-pulse TMS, we could show that evoked activity of neurons in the motor cortex within the first 6 ms shows high frequency peaks depending on TMS-induced current orientation. A multiphase spike rhythm alternating between excitation and inhibition occurs in the time window of 6-300 ms after the TMS pulse. This pattern can be associated with various human TMS responses recorded at the spinal cord and muscle level.

Our approach opens a new level of insight into TMS-brain interactions, which is crucial for the development of new non-invasive tools for targeted research and effective treatment of the human brain. 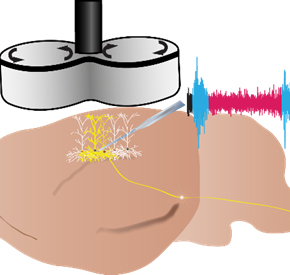